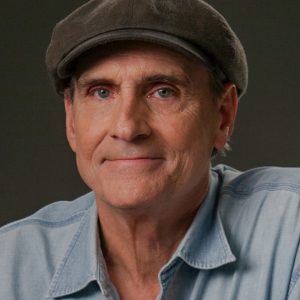 James Taylor’s music embodies the art of songwriting in its most personal and universal forms.

He is a master at describing specific, even autobiographical situations in a way that resonates with people everywhere. In 1971, Taylor was on the cover of Time magazine, heralded as the harbinger of the singer-songwriter era. Over four decades later his warm baritone, introspective lyrics and unique guitar playing still blaze a path to which young musicians aspire. He has sold over 100 million albums throughout his career and has earned 40 gold, platinum, and multi-platinum awards, multiple Grammy Awards and has been inducted into both the Rock and Roll Hall of Fame and the prestigious Songwriters Hall of Fame. In the summer of 2015 Taylor released Before This World, which earned him his first ever #1 album on the Billboard Charts and was nominated for a Grammy for Best Pop Vocal Album. In a career marked by artistic triumphs, the past decade for Taylor has been notable for both creative virtuosity and recognition of exceptional achievement. In 2012 he was awarded the distinguished Chevalier of the Order of Arts and Letters by the French government and in 2011, he was awarded the National Medal of Arts. In November of 2015, Taylor was honored with the Presidential Medal of Freedom, the Nation’s highest civilian honor.  In December of 2016, he received the Kennedy Center Honors, which is presented to individuals who have enriched American culture by achievement in performing arts. James is currently in the studio recording a new album of standards.

Managed in partnership with Gorfaine/Schwartz Agency