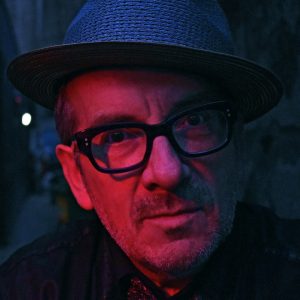 Elvis Costello is widely regarded as one of the most influential artists of a generation.

He has followed his musical curiosity in a career spanning more than 40 years. During that time he has explored many avenues as a composer, record producer, author, TV host and actor. His career started during the Punk and New Wave movement that emerged in the mid 1970’s. Although being a solo artist for much of his career, Costello is best known for his work with The Attractions and The Imposters. His songs have been recorded by artists such as Johnny Cash, Roy Orbison, George Jones and No Doubt. During his career he has received two Ivor Novello Awards for songwriting and a Grammy for “I Still Have That Other Girl,” from his 1998 collaboration with Burt Bacharach. Costello, alongside The Attractions, were inducted into The Rock and Roll Hall of Fame in 2003. In the same year he was awarded ASCAP’s prestigious Founder’s Award. The following year Costello was nominated for an Oscar for Best Song – “The Scarlet Tide” in the motion picture “Cold Mountain”. In 2018, Costello reunited with The Imposter’s to release his newest album, Look Now.