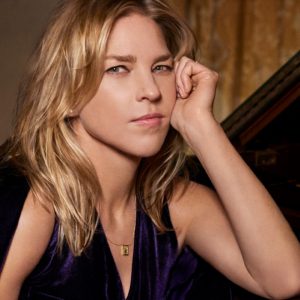 Diana Krall is the only jazz singer to have nine albums debut at the top of the Billboard Jazz Albums chart.

Her ascent to the top of the jazz world began in Nanaimo, British Columbia when she began studying the piano at just four years old. As a teenager she received a scholarship to Berklee College of Music in Boston and then signed with GRP Records in 1994. In 1999 Krall reached her watershed moment with the release of When I Look in Your Eyes. The recording spent an unprecedented 52 weeks in the #1 position on Billboard’s Jazz chart, won two Grammy Awards and went platinum in the U.S and Canada.  Her follow up album, The Look of Love, continued her upward trajectory by becoming a top ten seller on Billboard’s Top 200 Album Chart. From there she continued her success with an impressive body of work that has awarded her multiple Grammy Awards, Juno Awards and has earned a total of nineteen gold, platinum and multi-platinum albums. She has collaborated with artists including Paul McCartney, Barbra Streisand and Tony Bennett.  Her most recent release, Love Is Here To Stay, is a collaboration with her long-time friend and colleague Tony Bennett.  It was recorded with the Grammy award winning Bill Charlap Trio and the stunning result is a subtle, sophisticated and beautifully rendered love letter to The Gershwins’ music.